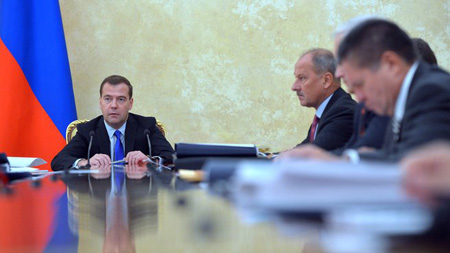 Agenda: on opening a credit line to fund the development of the Elginsk deposit, on funding a project to manufacture ammonia, methanol and carbamide in Tatarstan, on the additional capitalization of the Export Credit Agency of Russia (EXIAR).

Today, we are holding a meeting of Vnesheconombank Supervisory Board. To tell you the truth our agenda is as always extensive because of VEB’s role in investment policy. As a bank for development it helps to implement various projects in the high-technology sector.

Today, we’ll also identify strategic guidelines of Vnesheconombank’s development and discuss the Bank’s participation in funding a number of infrastructure projects and talk about major construction projects including Olympic ones.

I’d like to highlight several points before we start working in a closed format. First, I’d like to stress that Vnesheconombank has opened a credit line worth 2.5 billion dollars to fund the development of the Elginsk deposit; it’s the world’s largest undeveloped coal deposit in south-west part of Yakutia.

A large-scale project to develop the coal deposit in Yakutia is getting underway. Our objective is to develop a huge potential of our far-eastern regions (and it’s a part of our program of the Far East Development) and of course create modern growth points and highly efficient jobs as well as integrate the Far East into the common economic space. In the long run we should create favorable conditions for improving Far Eastern people’s quality of life.

I’d also like to highlight one more project aimed at funding the production of ammonia, methanol and carbamide in Tatarstan. I’d like to remind you that two and a half years ago the Bank’s Supervisory Board approved the extension of a credit worth 1.6 billion dollars for the construction of this integrated production facility. Nevertheless we need to make some adjustments including increased credit limits. It’s a large-scale interesting project. I hope that advanced energy-saving technologies will be used and that the project itself will be structured appropriately in terms of ecological standards. Negative environment effect should be minimized and products to be manufactured should be competitive and have good prospects for their sale on world markets and of course on our domestic market.

Let’s get down to discussing our agenda.

Internet Portal of the Government of the Russian Federation

Question: What sort of decision was made on the Elginsk deposit and as a whole on all issues discussed today?

V. Dmitriev: As far as the Elginsk deposit is concerned a positive decision was made on authorizing VEB to fund this project in the amount of 2.5 billion dollars. All basic parameters of this agreement were approved by the Bank’s Supervisory Board, so we are getting down to work.

Question: And on other issues discussed today specifically on EXIAR?

V. Dmitriev: We also made positive decisions on other issues. We made a decision to additionally capitalize EXIAR in the amount of more than 1 billion rubles thus enabling it to increase its capital and conduct insurance transactions through increasing its capital base. We considered several Olympic projects and also made concerted decisions on them related to increased budget upon meeting certain conditions that are in line with decisions made earlier by our Supervisory Board. As far as some facilities are concerned we made decisions to reduce financing budget with a view to economy or to get investors to increase their expenses.

We also discussed several projects related to charity activities. Specifically, we made a decision to extend a bridge-loan worth 250 million rubles to Public Television till next spring when they will be substituted by budgetary monetary funds.

We considered increasing the budget of a project on the construction of a large-scale integrated production facility in Tatarstan, in Mendeleevsk, namely, the Ammonii project aimed at manufacturing ammonia, carbamide and complex chemical fertilizers. This project is unique because it has no analogues in Russia and it was structured in close cooperation with Vnesheconombank’s foreign partners (these are banks from Japan and China). The most advanced equipment is supplied to implement this project making it possible to introduce energy saving technologies as well as technologies that minimize negative environment impact of this project.

We also discussed a number of other projects (we’ll make decisions on them after additional coordination) related to funding individual Russian companies by Vnesheconombank.

This is in general our today’s agenda. As usual decisions are made at a meeting of the working group representing interests of all members of the Bank’s Supervisory Board.

Question: Could you be more specific about the Olympics? There were disagreements between VEB and Sberbank on a ski-jump… Have you discussed this issue and made a decision on it today?

V. Dmitriev: Two ski-jumps will be fully ready and launched in due time. All the decisions were made in a concerted way, so, we don’t see any problems.

Question: How much will funding increase?

V. Dmitriev: According to our estimates, with regard to the projects we discussed an increase might be from 5 to 10 billion rubles.

Question: What projects are they?

V. Dmitriev: I’ll answer these questions when we have expert examination results from Olympstroi and Olympstroi’s confirmation of increasing budgets of these projects.

Question: Could you tell us in more detail about the Elginsk deposit? You are to provide 2.5 billion rubles.

V. Dmitriev: The Elginsk deposit project is so structured that it’s difficult to keep in mind terms and conditions of it even for a Noble prize laureate. There are several credit lines, different interest rates and different dates.

Question: At the end you said that you discussed funding of individual companies by VEB. What companies do you mean?

V. Dmitriev: I mentioned individual companies not by chance.

Question: Can’t you name them?

Question: What decision did you make?

Question: In what amount?

V. Dmitriev: In the amount and on the terms that will not be detrimental to Vnesheconombank’s financial stability.

Question: Excuse me, do you mean the Sukhoi Civil Aircraft (SCA) or some sort of holding?

Moderator: Thank you. Are there any more questions?

Dmitriev: Under the Law “On the Bank for Development” Vnesheconombank does not have the right to hold accounts of natural entities.

Question: US senators made a statement that a number of major Russian banks including VEB allegedly assist in supporting the Syrian authorities, specifically; VEB contributes to making payments on S-300. Is this true?

Dmitriev: Thank goodness, the senators don’t accuse Vnesheconombank of using chemical weapons against civilians. I think that American senators are now looking for all possible excuses to accuse or suspect institutions that are not accountable or subordinate to the American Administration of violating rules and procedures established by the U.S.”. Vnesheconombank c acts in compliance with the Law on the Bank for Development and other Russian laws. And I’d like to stress that as far as international sanctions are concerned Vnesheconombank is strictly observing them.

And another thing, in its capacity as a bank for development Vnesheconombank is the authorized agent for the Government in servicing Russia’s foreign debt. So, under this authority and agreements on repaying Syria’s debt to the Russian Federation under Soviet-era debts, Vnesheconombank is an authorized bank responsible for holding tenders.

Journalists: Thank you very much.

Origin: Internet Portal of the Government of the Russian Federation