On the agenda: Vnesheconombank’s development strategy up to 2021, VEB’s draft financial plan for a period of up to 2018, the Russian Export Center’s activity.

Before a meeting of VEB’s Supervisory Board meeting, Dmitry Medvedev visited VEB’s laboratory for the development of a new customer service model Sky Lab and took a look at the way it works. 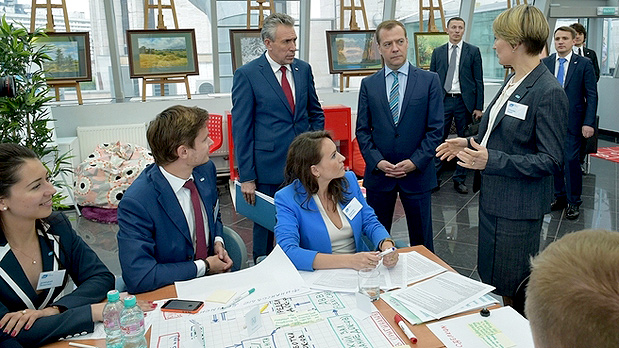 Today, we are discussing VEB’s new strategy for a period of up to 2021. It is a whole package of innovations which is supposed to change the state corporation’s business model and adapt it to new conditions, new challenges. At the same time, the Bank’s strategic goal remains unchanged – providing support for the development of our economy as well as Vnesheconombank’s main status and mission (we call it a bank but it’s a development institution). 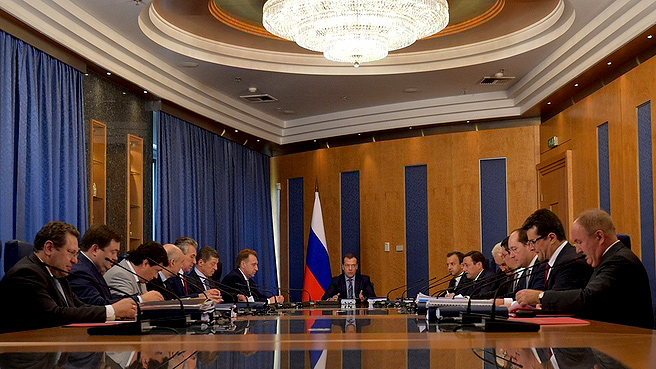 The document has been prepared by a new team in a short period of time. It was discussed at various meetings at the Government, at my office and of course with the Bank’s customers. This work resulted in adding a whole number of interesting proposals.

What can we say about the current status of the document? The strategy prepared proved to be easy to discuss. In preparing it, they used advanced managerial methods that are applied both by financing institutions and technological leaders. At the moment, we have good grounds to take it as a basis but we should continue to work on it.

I hope that Vnesheconombank would be able to do all necessary work in a short period of time and Vnesheconombank’s development strategy up to 2021 will be brushed up (if we finally agree on it) and will be finally approved as early as at the start of September.

This work should focus on three lines of activity that are now most pressing for our economy and hence for VEB too. They include support for high technology industries, support for infrastructure projects and support for non- raw materials exports that need such support badly.

VEB’s draft development strategy provides not only for changing VEB’s structure but also Vnesheconombank Group’s entire structure. Methods, approaches including methods of providing money should be changed. In the long run, the state corporation should be more of a moderator than a creditor, that is, it should help business to structure transactions and of course, engage commercial banks in implementing projects and simply raise money from the market.

The strategy provides for basic and optimistic scenarios. I suggest that we shouldn’t now fixate on figures because we have to make a whole number of decisions including a decision on the future of VEB’s assets. But in any case, under the basic scenario the Bank should be able to provide significant loan facilities worth hundreds of billions of rubles to fund various projects.

There are also other important issues on our today’s agenda for example VEB’s draft financial plan for the second half of 2016 and for a planned period of 2017-2018. The new team studied the state corporation’s weak and strong points. They performed asset recognition, optimized expenses (I hope to a sufficient degree), reconsidered a number of decisions specifying high priority objectives for VEB’s stable operation now and in the future. All this made it possible to make a decision to support VEB this year. VEB received a subsidy worth 150 billion rubles. About half of it has been already transferred to the Bank. The Bank’s balance sheet is balanced in the mid-term.

Another objective is to support and expand exports. Import substitution policy enables our economy to apply a new model. And this sets a task of increasing non-raw materials exports substantially. VEB is supposed to accomplish this task.

Today, we’ll deal with a whole number of issues associated with the Russian Export Center’s activity. It is a member of Vnesheconombank Group. This Center should become a window to provide credit, insurance, guarantee and non-financial support for projects of any sizes.

We also have to discuss a whole number of issues which are in the competence of VEB’s Supervisory Board including issues of great social significance, for example, creating a medical cluster on the territory of Caucasus Mineral Waters. And this is not the only issue today, let’s get down to discussing points on the today’s agenda.

Origin: Internet site of the Government of the Russian Federation