A Regular Meeting of VEB’s Supervisory Board Held 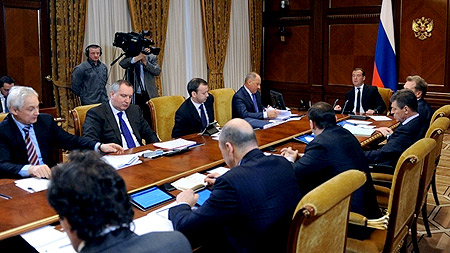 Today, we’ll discuss a lot of important questions. Above all I would like to mention a successful placement of a debut issue of euro-denominated eurobonds. I know that in general they are in demand among foreign investors and this is a sign of a favorable climate and the international business community’s trust in the Bank and in Russia as a whole. This is a positive development especially taking into account rather strange and controversial decisions being taken by some European Union member states, here I mean Cyprus. To put it bluntly, it looks like a seizure of other people’s money. I don’t know who the author of this idea is but it looks something like this. This sort of practice was unfortunately well-known and common in the Soviet period when money was exchanged with the use of coefficients and was not returned. But Cyprus is a country with a market-oriented economy and a member of the European Union. There is no doubt that we have to make certain conclusions from this experience as we maintain our own ties with Cyprus and we are sure to continue consultations. And we’ll have to adjust our position to some extent being aware that it’s better to keep money in Russian banks. Therefore, this makes us think about improving business climate and business environment in our country. This is a sort of lyrical digression about international developments that make markets shake up and cause currency exchange rates adjustments.

And now let’s move to our agenda. One of the issues is to approve programs of issuing classical and stock market bonds by VEB with a nominal value of 590 billion rubles. This must give the Bank a greater flexibility upon choosing proper timing for bond placement. By placing bonds on the market the Bank will b e able to obtain long-term credit facilities on favorable terms and use them to fund large-scale investment projects.

We have also to discuss main parameters of transactions to invest pension savings funds. I’d like to remind you that in late 2009, VEB was allowed to purchase non-government bonds through using pension funds of the so-called undecideds and form additional instruments for raising long money for Russia’s real economy and this is of course very important. As of December 31, 2012, the Bank purchased these bonds for an amount of 330 billion rubles and the bond portfolio yield rate amounted to more than 9% - almost 2.5% higher than the annual inflation rate.

Moreover, restrictions were removed on purchasing bonds backed by government guarantees of the Russian Federation as well as bonds of domestic companies with long-term credit rating no lower than sovereign rating. To be more precise, in order to better protect pension money, main transactions parameters – expected amount of purchase, maturity of bonds - are to be approved by Vnesheconombank’s Supervisory Board.

VEB has already received official applications from RZHD, the Federal Network Company, the Housing Mortgage Lending Agency and some other companies for placing bonds this year for a significant sum of about 240 billion rubles.

The funds will be used to finance long-term infrastructure projects, address housing problems, develop and introduce innovative technologies, including transport technologies that are being introduced in RZHD and the Federal Network Company. We need money to reconstruct substations in various regions of our country.

Furthermore, we’ll discuss potential participation of another 30 companies in this program. They want to place bonds this year for an amount of more than 200 billion rubles. We’ll have a look at the Bank’s regulatory documents including its risk management policy. This policy is to specify unified principles of managing risks and reporting formats within VEB Group. I know that to this end the Bank used the world’s best practices and business experience of leading development institutions as well as recommendations of the Basel Committee for Banking Supervision. I hope that this will boost the Group’s financial sustainability and its asset management efficiency.

And finally, we’ll have to appoint a competition committee on the Development Award instituted by Vnesheconombank in 2012. It will be given to companies and organizations at the Petersburg International Economic Forum. This award will be presented for implementing quality investment programs and projects. Nominees are to be selected by leading experts and employees of the Government economic sector and naturally by VEB’ representatives.

This once again confirms that we are trying to improve business climate and support those who work in conformity with the law and efficiently.

V.Dmitriev: At our regular meeting of Vnesheconombank’s Supervisory Board we discussed about 20 issues related to Vnesheconombank’s day-to-day activity including investment projects and our efforts to coordinate a number of regulatory documents at our Supervisory Board meetings. Above all, I’d like to stress that our Supervisory Board approved a program of borrowings on the domestic market. The program provides for issuing ruble and currency - denominated bonds for a total amount of 590 billion rubles taking into account that the plan of developing Vnesheconombank’s investment activity provides for committing 770 billion rubles to support investment projects. It goes without saying that some funds will be made available through issuing domestic ruble and currency-denominated bonds. Ruble-denominated bonds are to be issued for an amount of 220 billion rubles and as far as dollar-denominated bonds are concerned we plan to make two bond issues worth 500 million each, euro-denominated - for an amount of 300 and 500 million euros.

Moreover, we have also discussed issues related to funding a number of Olympic facilities taking into consideration changes in the current situation and the need to support investors participating in implementing investment projects. We have considered an issue on increasing limits for several resident banks. A whole number of issues were devoted to coordinating regulatory documents on Vnesheconombank’s day-to-day activity. We discussed our credit and risk management policies with regard to all members of Vnesheconombank Group. We also discussed issues related to Vnesheconombank’s subsidiaries operating abroad and made appropriate decisions designed to support their financial activity. Here I mean credits extended for day-to-day activities of our subsidiary institutions.

As far as EXIAR is concerned (the Export Credit Agency of Russia) we have approved an auditor – Ernst&Young.

As to audit, today we have also approved Vnesheconombank’s auditor’s report for the 4th quarter of last year and a report of an official who is responsible for meeting insider information requirements by the Bank.

These are the issues we have discussed today as a whole. As far as regulatory documents are concerned we made significant headway in introducing unified operational standards for Vnesheconombank Group.

Question: Have you discussed the Cypriot issue mentioned by Mr. Medvedev at the start of the meeting?

Question: What do you think about the decision taken by the Cypriot authorities?

V.Dmitriev: I have nothing to add to what the Prime Minister and the Chairman of our Supervisory Board said on this account.

Question: Did Mechel turn to VEB for financing the Elginsk deposit development?

V.Dmitriev: Let’s do it in the following way. First, we’ll consider this proposal and submit it to consideration by our corporate governance bodies and then we’ll be able to talk about financing amounts.

Question: You’ve mentioned an issue of increasing limits for resident banks. Does this concern Olympic facilities?

V.Dmitriev: No, it doen’t. This concerns our usual transactions with them.

Question: What banks are they? And what’s the amount of increase?

V.Dmitriev: They are VTB Bank, SME Bank and Sberbank but I don’t remember the amount of increase. 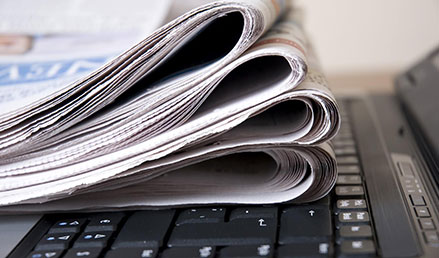 State Corporation ‘Bank for Development and Foreign Economic Affairs (Vnesheconombank)’ and the European Investment Bank (EIB) entered into a credit agreement. Under the agreement EIB is to extend 200 million euros to Vnesheconombank to fund projects of small and medium-sized enterprises as well as other projects in line with financing institutions’ standards. Projects are expected to be funded through Vnesheconombank’s subsidiary banks.

On behalf of Vnesheconombank the agreement was signed by Chairman Vladimir Dmitriev and on behalf of EIB – by Vice President Anton Rop. 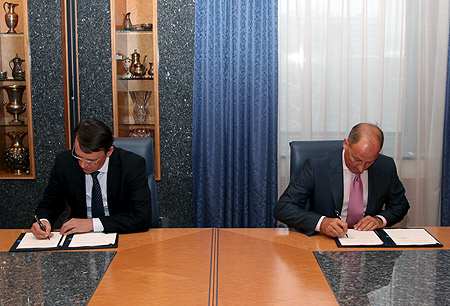 This agreement would help to enhance mutually beneficial cooperation between Vnesheconombank and EIB as part of supporting the initiative “Partnership for Modernization” put forward by the European Union and the Russian Federation at the summit in June of 2010.

The credit agreement was made to build on the Memorandum of Understanding signed by the parties earlier. Under the Memorandum the financing institutions agreed to work together on projects being implemented by European and Russian companies in Russia as part of Partnership. The parties agreed to extend up to 500 million euros each to this end provided that potential projects are in line with financial criteria of Vnesheconombank and EIB.