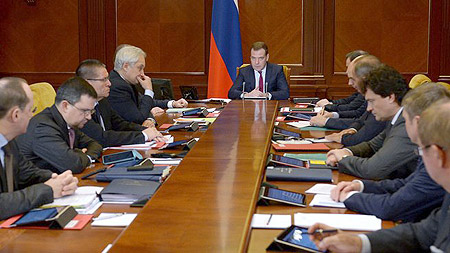 Good afternoon. Today, we are holding the first meeting of the Bank’s Supervisory Board in 2014. I would like to say a few words about the Bank’s last year’s performance. Last year, the Bank’s loan portfolio grew by one-third and now exceeds one trillion rubles. On the whole, the Bank developed even more quickly than planned, with lending targets met in early 2013. Obviously, this was largely linked with planned events and current developments, primarily the 2014 Winter Olympics. And the 2014 Winter Paralympics are scheduled to begin tomorrow. Vnesheconombank is the main creditor of many Olympic construction projects. Although you and I have devoted a lot of time to this issue and have often debated about what should or should not be done, these complicated projects would have never been implemented without this support and without steady and timely funding. You and I should also realize this, and I would like to thank the Bank’s team for this.

And now, I would like to say just a few words about the agenda which has several important items on it, including major projects with the Bank’s participation. For instance, I would like to single out the creation of a production facility that will manufacture advanced polymer materials in Tatarstan. Hopefully, if we implement this project, we will be able to manufacture the entire range of organosilicon substances which, as is known, are strategic raw materials. These substances are used in the aircraft construction, shipbuilding, petrochemical and electronics industries. I hope that this project will have some rather good export prospects.

There are plans to establish a credit line worth almost eight billion rubles for funding this project. Most of these funds will be used to purchase Russian-made equipment and the services of Russian contractors, which is also quite good.

I would like to mention one more issue, specifically, exports support. Quite recently, I gave a number of instructions in this respect at a Government meeting. Of course, an absolute majority of these instructions are intended for Vnesheconombank as the main development institution in this area. Therefore I am waiting to hear a report, and, naturally, I expect well-coordinated work involving the Bank and its affiliated organisations.

We have to make this work more systematic and purpose-oriented. With this in mind, we are establishing a committee on exports and foreign economic strategy under Vnesheconombank’s Supervisory Board. The committee will be expected to ensure effective cooperation between government authorities and governing bodies, exporters and the main business associations, to provide essential assistance whenever necessary, and probably to amend legislation. The committee will also submit proposals on additional methods for protecting the rights of investors and Russian companies, as well as recommendations on export priorities. These proposals should be formulated and submitted to a meeting of our Supervisory Board.

We’ll discuss these and, naturally, some other issues today. So, let’s get down to work. 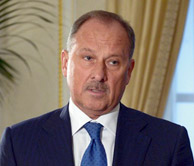 Question: Can you say a few words about the results of the Bank’s Supervisory Board meeting?

Dmitriev: At our first Supervisory Board meeting we summed up the last year’s performance and discussed several issues related to the Bank’s current activity as well as a number of business-projects and organizational issues. We also discussed issues of our top-priority lines of activity in 2014.

As far as the Bank’s day-to-day activities are concerned our Supervisory Board supported a proposal for establishing a committee on foreign economic strategy and support for exports. This committee is being established under the Bank’s Supervisory Board as an instrument for coordinating common approaches to forming and operating a comprehensive exports support system. The committee will be comprised of not only members of our Supervisory Board but also of representatives of those institutions, federal executive authorities which are directly involved in supporting Russian industrial exports. Here I mean the Ministry of Industry and Trade.

As far as the committee’s activity is concerned we intend to rely on the opinion of business and the business community and be in close contact with the existing institutions including such Vnesheconombank’s subsidiaries as Roseximbank and EXIAR and in a broader context with the expert community, the Strategic Initiatives Agency, associations of business circles, that is, all those interested in promoting Russian industrial exports irrespective of owners of various companies. Here I mean export promotion of products manufactured by small and medium-sized enterprises.

The committee will be involved in law-making and regulatory activities in so far as they relate to activities of certain ministries and agencies, so this committee will be an effective instrument for supporting exports. The committee is not to duplicate the existing institutions established under our Supervisory Board. The working group is a basic instrument which deals with issues within the Supervisory Board’s competence and submits its proposals to the Bank’s Supervisory Board. The committee’s decisions will be recommendatory in nature but it was considered expedient to establish it to institutionally support and promote Russian industrial exports on the basis of Vnesheconombank which was recognized by the Government’s decision as a coordinating body in establishing and operating this system.

The Prime Minister said about setting up import-substituting production facilities in Tatarstan. Methylchlorosilanes are new products for the Russian market; these are import-substituting and export-oriented production facilities. These polymers are widely used in such sectors of the Russian economy as mechanical engineering, aircraft construction, space, chemistry and military industrial complex. So, we are moving to a full self-sufficiency creating a favorable business environment in Tatarstan. We are also creating new jobs in these new production facilities. And the state represented by the Ministry of Industry and Trade has already invested budgetary funds in this project, there are also private investors. This is a public private partnership supported by Vnesheconombank’s credit resources.

Reviewing prospects for Vnesheconombank’s activity in 2014 we are seriously reorganizing and redistributing powers within the Bank. Here I mean functions of certain Vnesheconombank’s executives, setting up structures that would fully focus on main lines of VEB’s core lines of activities – namely its investment activity and efforts to support Vnesheconombank’s financial transactions. And as part of this reorganization we’ll instruct our investment subdivisions not only to support certain sectors as set forth in our Memorandum on Financial Policies but also to support specific projects focusing on import substitution, creating new jobs and providing support for small and medium-sized enterprises. We’ll undertake this activity cooperating in close contact with Vnesheconombank’s other institutions – the Federal Project Finance Center, VEB-Capital and SME Bank. An increased support for mono-cities has been and will be a part of this activity.

As far as mono-cities are concerned, we can see a serious challenge in terms of ensuring employment and creating jobs for small and medium-sized enterprises as well as creating opportunities for Vnesheconombank’s institutions to act as investors because one of the most serious problems we are coming up against analyzing the situation and opportunities for addressing serious economic and social problems of mono-cities is the absence of investors. And in this case, Vnesheconombank’s institutions could act as investors, prepare investment proposals and then offer good products, structural products with the assistance Of Vnesheconombank as a creditor to the market with a view to… These hopes are based on the real interest on the part of Russian and foreign investors to offer them to the market. Lack of funds for projects, lack of qualifications and competence are for the most part hinder socio-economic development of development of mono-cities. These are the issues we have discussed today at our Supervisory Board meeting.

Question: Have you discussed VEB’s additional capitalization? If you have, what decisions were made?

Dmitriev: An issue of Vnesheconombank’s additional capitalization as part of measures for supporting Vnesheconombank was discussed last year and in this respect relevant decisions were made. You know that the Finance Ministry introduced appropriate changes to the State Duma and specific proposals were also introduced to the Government. These proposals deal with various forms of government support including the possibility to convert deposits raised from the National Wealth Fund into instruments that would be equated to Tie-2-capital. The work on this is coming to an end and we think at the end of the first quarter – at the beginning of the second one it will be completed and appropriate practical decisions will be taken.

How would assess Vnesheconombank’s losses associated with the situation in Ukraine?

Dmitriev: So far we can see problems related as a whole to the socio-economic situation in Ukraine (and this affects not only Vnesheconombank), for example, outflow of funds raised from corporate structures and natural entities is on the rise. Lately it has diminished. We state that at least natural entities are withdrawing funds from their accounts but not on such a massive scale as they did in the past two weeks. Moreover, we can see an increase in receipts on natural entities’ accounts.

To our best knowledge corporate customers and above all companies with state participation are reducing balances in their accounts in Russian banks represented in Ukraine but we are not talking about any losses so far. Vnesheconombank’s customers are serving their credits. There are no signs that Prominvestbank’s borrowers do not intend to service their credits.

Question: Fitch estimates VEB’s risks in Ukraine at 70 % of its capital?

Dmitriev: We assess risk to an extent to which the situation in Ukraine is going to develop. You can see that everything is volatile.

Question: Do you have joint loan portfolio in Ukraine?

Dmitriev: We extended credits to Ukraine through Prominvestbank. We have limits with regard to Prominnvestbank and Prominvestbank operates within its limits.

Dmitriev: We have no plans to sell Prominvestbank.

Question: Does the Industrial Union of Donbass remain to be your important asset from which you are not going to withdraw?

Dmitriev: The Industrial Union of Donbass is owned by Ukrainian and Russian investors, so you should ask them. It’s another matter that Vnesheconombank (this is public information)extended credits to Russian investors in 2009 to purchase these assets.